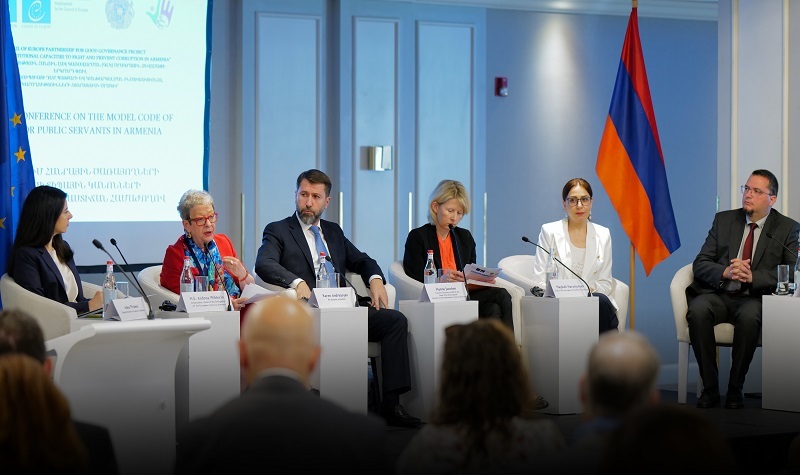 On July 4, a high-level Conference on the Model Code of Conduct for Public Servants in Armenia was held at the Armenia Marriot Hotel in Yerevan.

The conference was jointly organized by the Council of Europe and the Corruption Prevention Commission of Armenia in the framework of the EU/Council of Europe Partnership for Good Governance II Project on “Strengthening institutional capacities to fight and prevent corruption in Armenia”.

60 high-level representatives of key public institutions of Armenia, as well as civil society and the international donor community, attended the conference.

Chairwoman of the Corruption Prevention Commission Haykuhi Harutyunyan, Minister of Justice of the Republic of Armenia Karen Andreasyan, European Union Ambassador to Armenia Andrea Wiktorin, Head of the Action Against Economic Crime Department, Executive Secretary of the Group of States against Corruption (GRECO) and Deputy Minister of Justice of Albania Adea Pirdeni delivered opening remarks at the high-level conference.

Haykuhi Harutyunyan noted in her speech that the Model Code of Conduct for Public Servants in Armenia would be localized in all departments in the next three months. The Commission will provide guidance and appropriate support together with USAID.

In her opening remarks, the Ambassador stressed the preparedness of the European Union to further cooperate with the public institutions of Armenia on the advancement of the reform processes, such as the civil service reform and the implementation of the public administration strategy.

The development, promotion and guidance of the Model Code of Conduct are envisaged in the Armenian Public Service Law as part of the Corruption Prevention Commission’s responsibility. Furthermore, the adoption of codes of conduct for public officials is one of the recommended actions by the Group of States against Corruption (GRECO) as a measure toward enhancing the integrity of public officials.

The Model Code of Conduct for Public Servants in Armenia is part of the accomplishments through the cooperation between the Corruption Prevention Commission of Armenia and the Project and the result of a long process of joint development, public consultation, modifications, and official approvals, which began in 2021.