Public opinion on corruption in Armenia. The results of the study among 1520 people 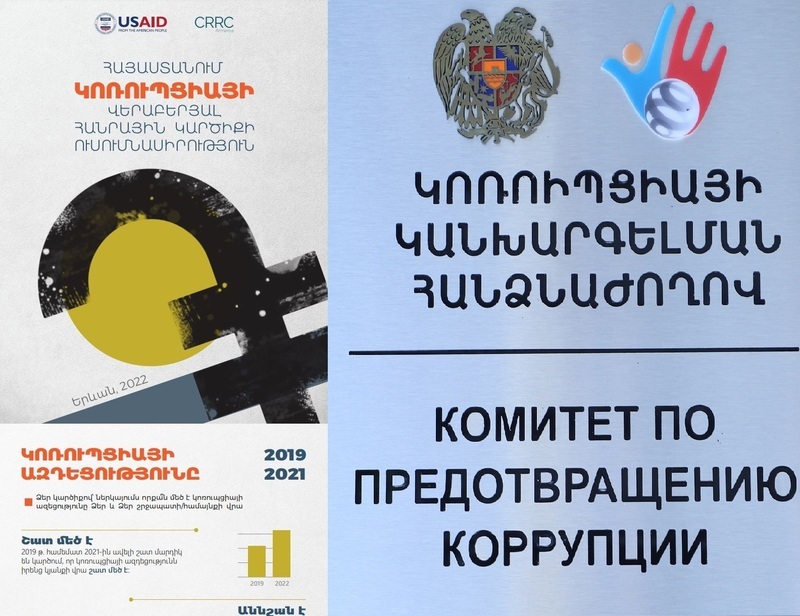 This report covers a public opinion survey on corruption conducted in October-November of 2021 with 1,520 households in the Republic of Armenia under the USAID-supported Armenia Integrity Project (AIP). Data collection was carried out through face-to-face interviews with portable CAPI-powered devices.

The research aims to reveal the perception of corruption among RA residents. For comparison, in some cases, the results of similar surveys conducted in 2019, 2008-2010 have been taken into account.

Although the Commission has some reservations regarding the image formed as a result of the survey and the content of the questionnaire used, below we present some data from the study of public opinion on corruption in Armenia.

According to the survey, the media, judges and courts, parties are the most corrupt structures in public perception, and health care and electoral processes are perceived as the most corrupt of the services or sectors.

According to the perception of most of the citizens who participated in the survey, the influence of corruption on them is small or insignificant. According to the majority of the respondents, the number of cases of demanding or expecting bribes and the amount of bribes have currently decreased.

As the basic motivations for taking bribes, the respondents mentioned the desire to live better, the obligation to give a part of the bribe more "above" and the justification for giving or taking bribes by everyone, and as the main reason for refusing to get involved in corruption, the high risk of punishment was most often mentioned.

Most of the respondents, about 65 percent, are not aware of which state bodies and non-governmental organizations carry out anti-corruption activities in Armenia. Citizens who are aware of those bodies and organizations mentioned the RA Police, National Security Service and the Corruption Prevention Commission most often.

About 70 percent of the people who participated in the survey think that there is a great need for information support.

Information clarifying their rights and responsibilities in relation to corruption and information about the hotlines of state bodies were given great importance.