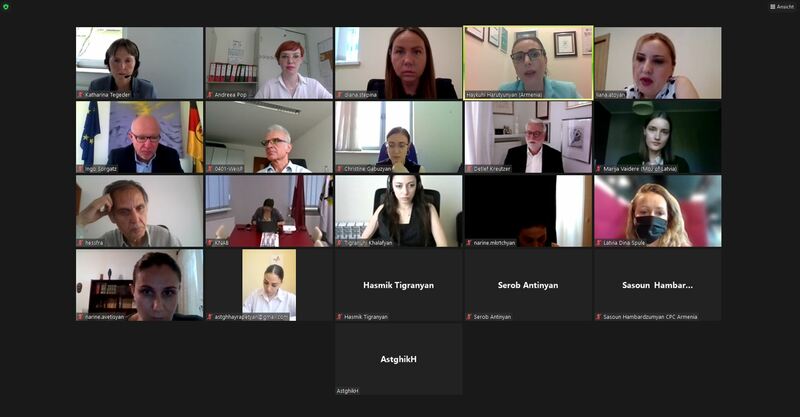 The first Steering Committee meeting of the Twinning Project ՛՛Fostering integrity and preventing corruption in the public sector in Armenia” took place on July 14, 2022, in a distant format via Zoom platform, with the participation of all members, MS and BC Project Leaders, Junior Project Leader from Latvia, RTA and RTA counterpart, BC component leaders, representatives from German Foundation of International Legal Cooperation (IRZ), as well as representatives from the government of Armenia, Ministry of Justice of RA, and EU Delegation to Armenia.

Haykuhi Harutyunyan, Chairwoman of the Corruption Prevention Commission opened the meeting and later the meeting was chaired by MS Project Leader Ingo Sorgatz.

Two main documents – The initial Work Plan and Communication and Visibility Plans were approved by the Steering Committee members.

Overall, the meeting proceeded in a positive and constructive atmosphere. The meeting ended with comprehensive discussions about the implementation of further activities. The partners thanked each other for their dedicated work, assuring that their cooperation would continue in the same way.